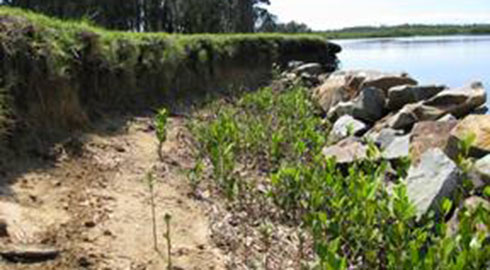 Historically, rock revetment is the traditional method of protecting river banks from the erosive forces of wind, waves and tide. Rock revetment has been widely adopted as it is a relatively inexpensive technique which is largely successful at arresting erosion in the short term. Although rock revetment provides more surface area and complexity for intertidal invertebrates than traditional vertical seawalls their use is still at the expense of naturally occurring foreshore vegetation such as mangroves and saltmarsh. The loss of this riparian vegetation eliminates the natural buffer for the waterway from landward influences (sediment and nutrient input into the waterway), and removes the sheltering features and food source (falling insects, fruit and other vegetation matter) provided from overhanging or partially submerged vegetation. Rock revetment does reduce erosion and therefore sedimentation into the waterway, but a natural vegetation buffer is better at perfoming this function. 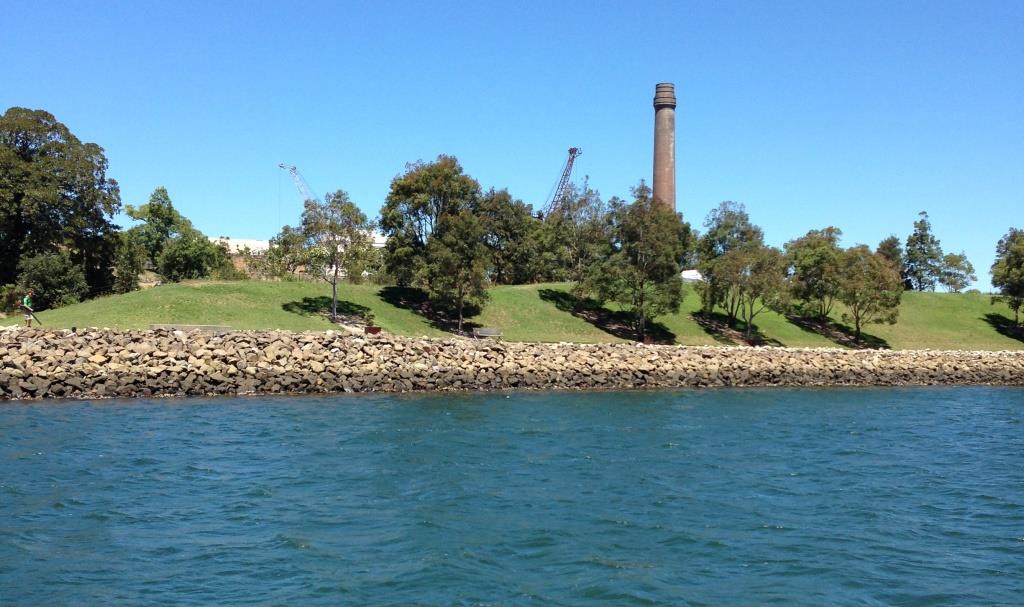 As with construction of seawalls, the best thing to do if possible, is to keep the site as natural as possible. This includes planting of native vegetation that has been lost from the site and that if reinstated will slow or halt the progression of erosion. It may be that the site becomes inundated with vegetative debris (e.g. seaweed wrack) or man-made rubbish that smothers any mangrove or riparian seedlings that begin growing there. In this instance, the use of a temporary barrier such as plastic mesh fencing acts to keep debris out and allow seedlings to establish may be the answer. The barrier can be removed once the shoreline is stabilised. 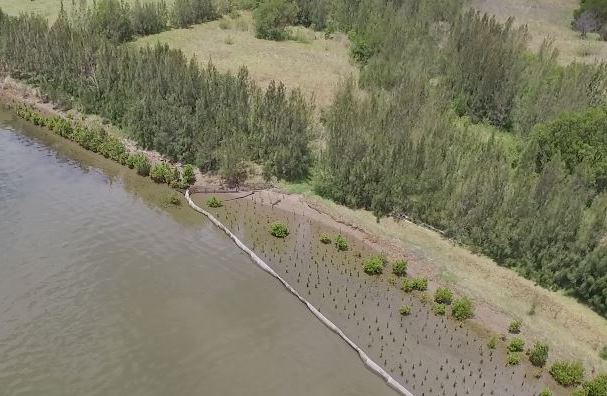 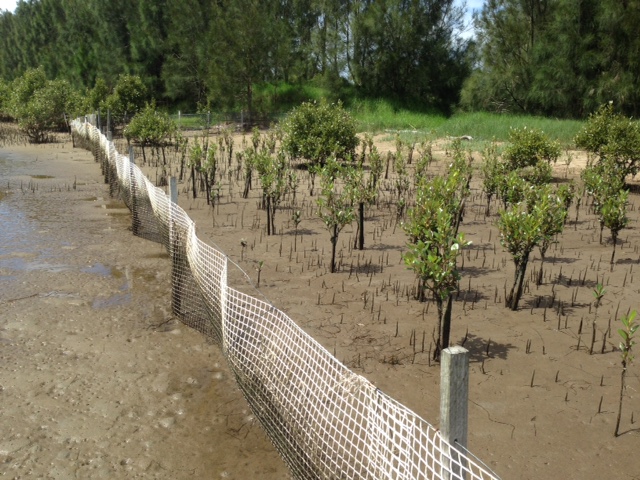 Other ‘softer’ erosion control methods aim to reduce wave action from removing vegetation and undercutting banks, allowing estuarine vegetation such as mangroves to stabilise the shoreline. Softer versions of these will either decompose over time, or be incorporated into the landscape and create habitat features in themselves. Materials such as coir logs, brush bundles and anchored timber logs break the wave impact, slowing it down and creating near-still water behind. As sediment accumulates and vegetation establishes, the vegetation becomes the feature that controls erosive forces on the banks.

Coir logs are tubes of densely packed coconut fibre that are bound together with coir netting and staked in place along the toe of the bank. The logs are biodegradable, gradually breaking apart through exposure to water movement and weather and as such do not provide long-term bank stabilisation. They are relatively inexpensive compared to other techniques, lightweight and easily installed by hand. They are flexible, curve easily around banks and existing vegetation and can be used as a single row or to create terraces. This technique is applicable at sites of low rates of erosion with low water velocity applied in unison with revegetation and stock management fencing, where required. 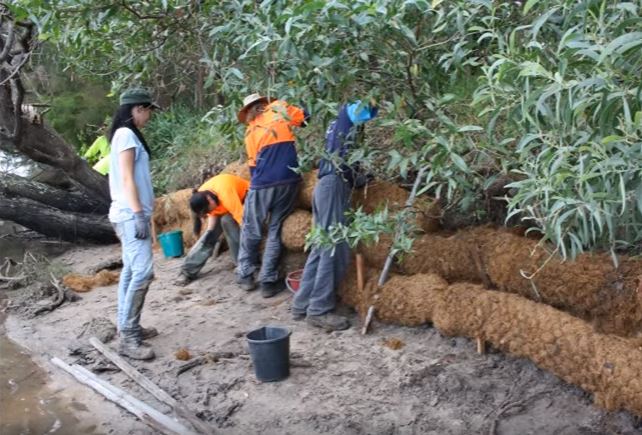 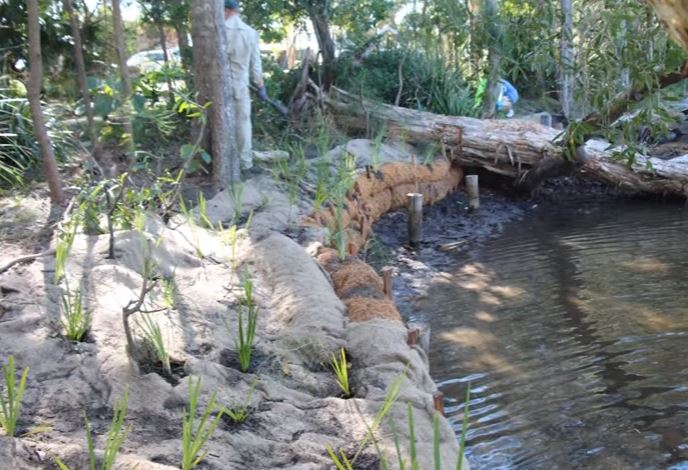 Brush bundles are locally-sourced cut branches tied and woven together between closely placed poles to create quite robust low ‘fences’ on the intertidal flat in front of an eroding bank. Brush bundles have been extensively implemented in Europe and America during the past 100 years due to their low cost and simplicity. The technique is applicable for banks with low-level erosion (scour/undercutting) that are susceptible to low to medium flow velocities and low to medium wave heights. It can also be applied to heavily eroded banks if the area is accessible for machinery to regrade and compact the soil. The bundle structure generally has a life between 5 to 10 years, which provides time for revegetation to establish. Long-term stability relies on the success of establishing vegetation. 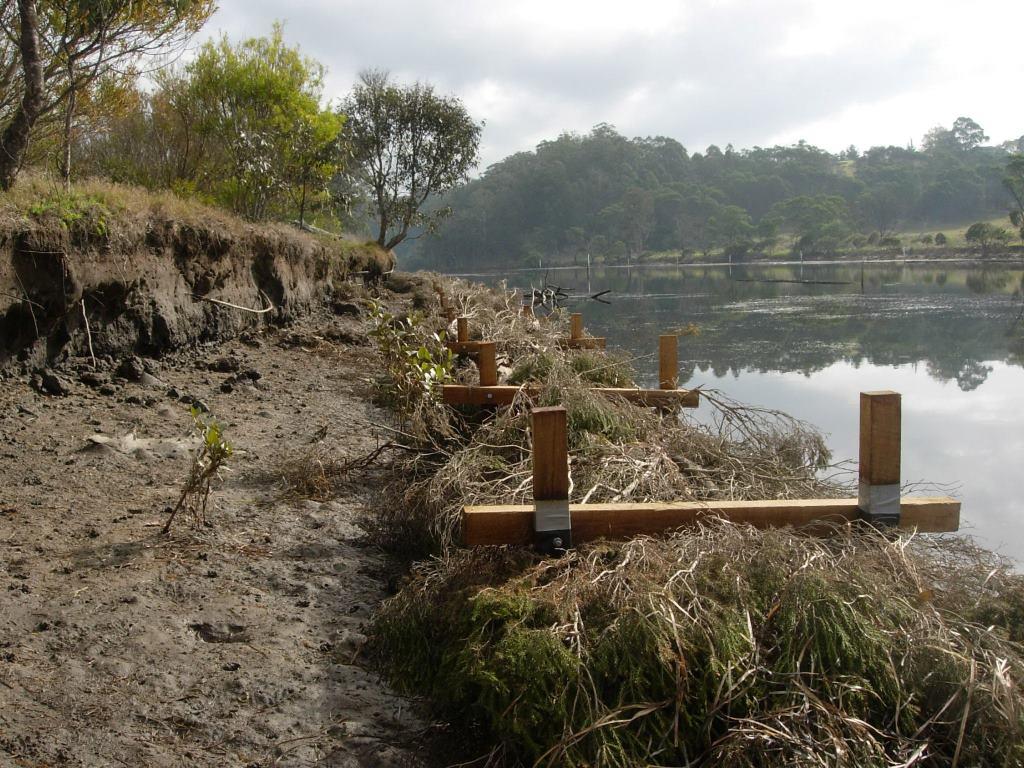 Another more permanent wave barrier structure type uses rock to dissipate wave action. Structures are built in a “dog-leg” formation, roughly parallel, about 2-5m in front of the eroding bank and at a height that corresponds to the local mean high water level. As with the other methods, they create an area of still water in front of the eroding bank. Gaps between the structures and the bank allow for sediment accumulation, mangrove seedling recruitment and fish access. Vegetation establishment can be enhanced by planting mangrove seedlings into the still water rather than waiting for natural colonisation. 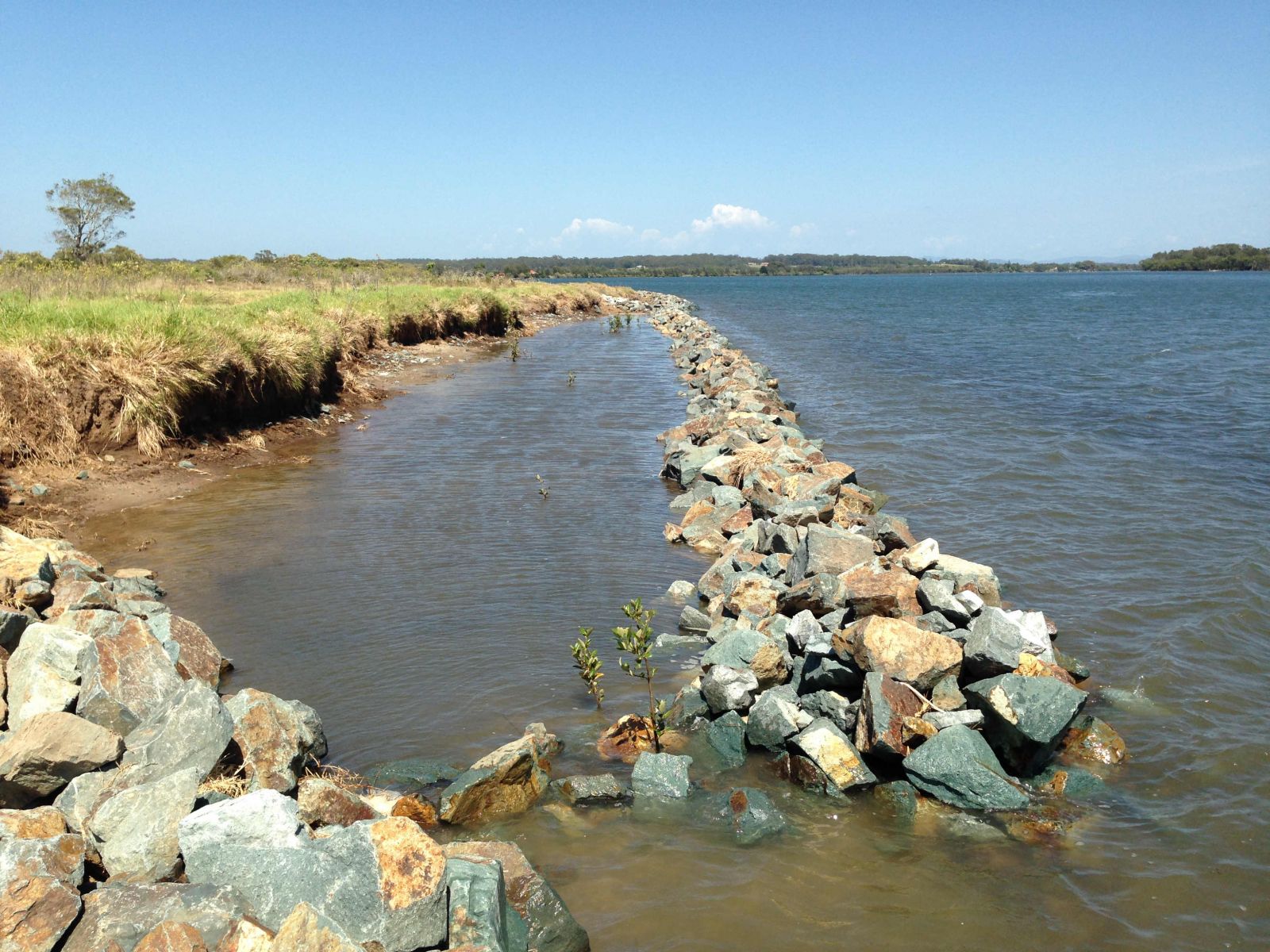 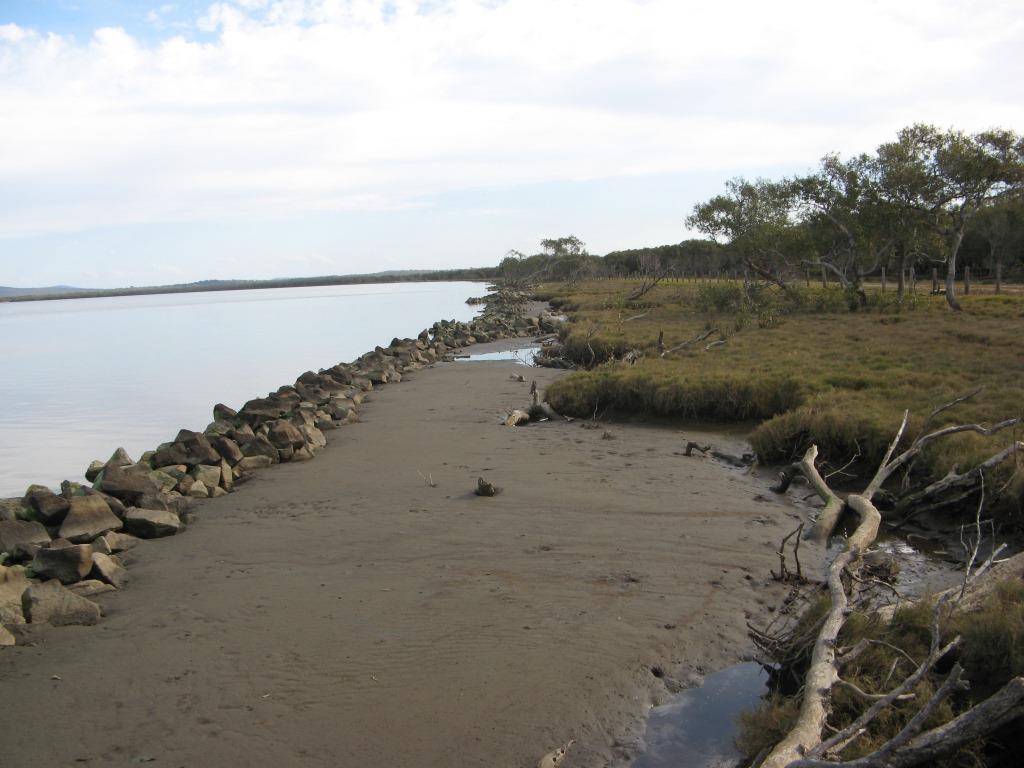 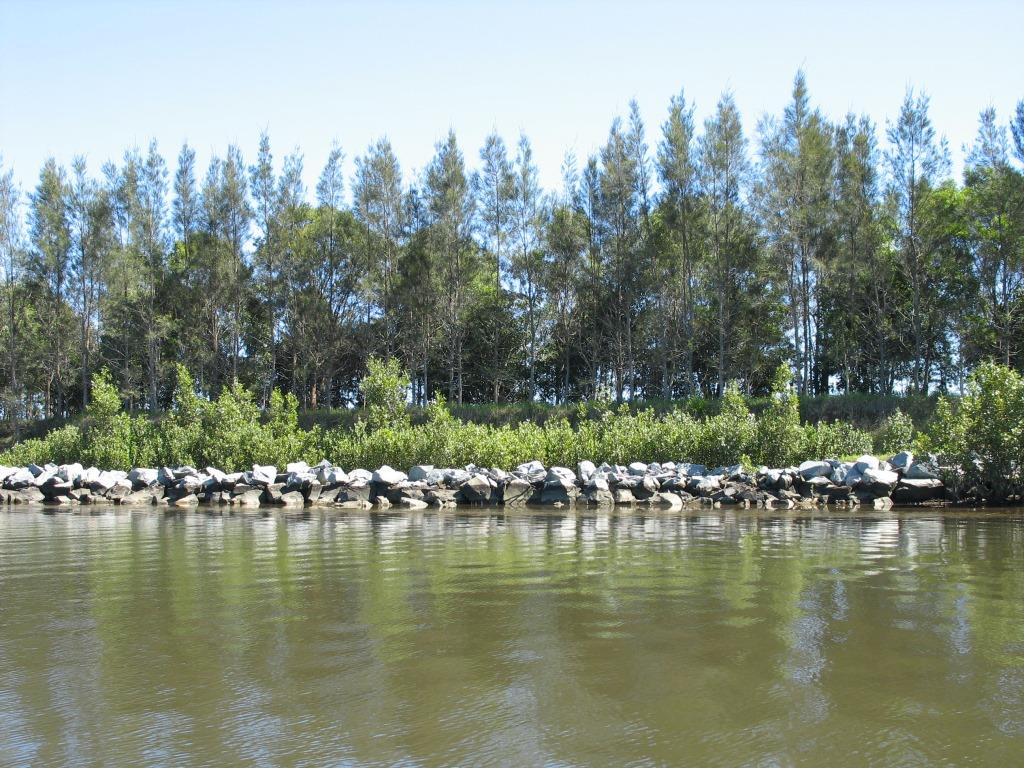 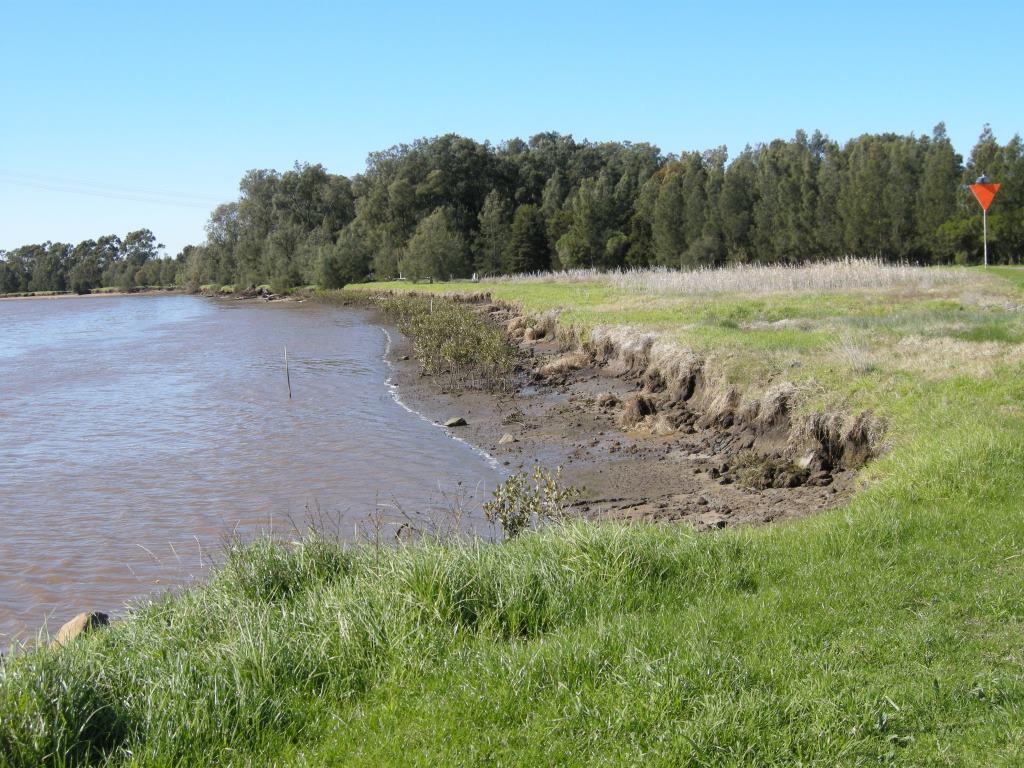 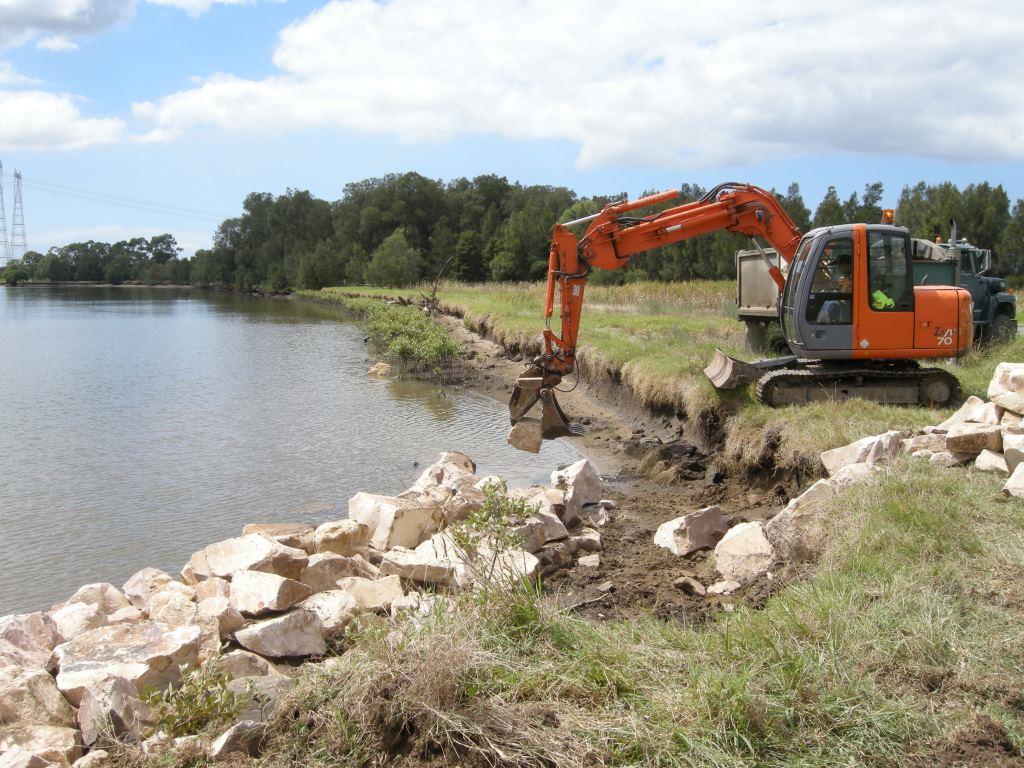 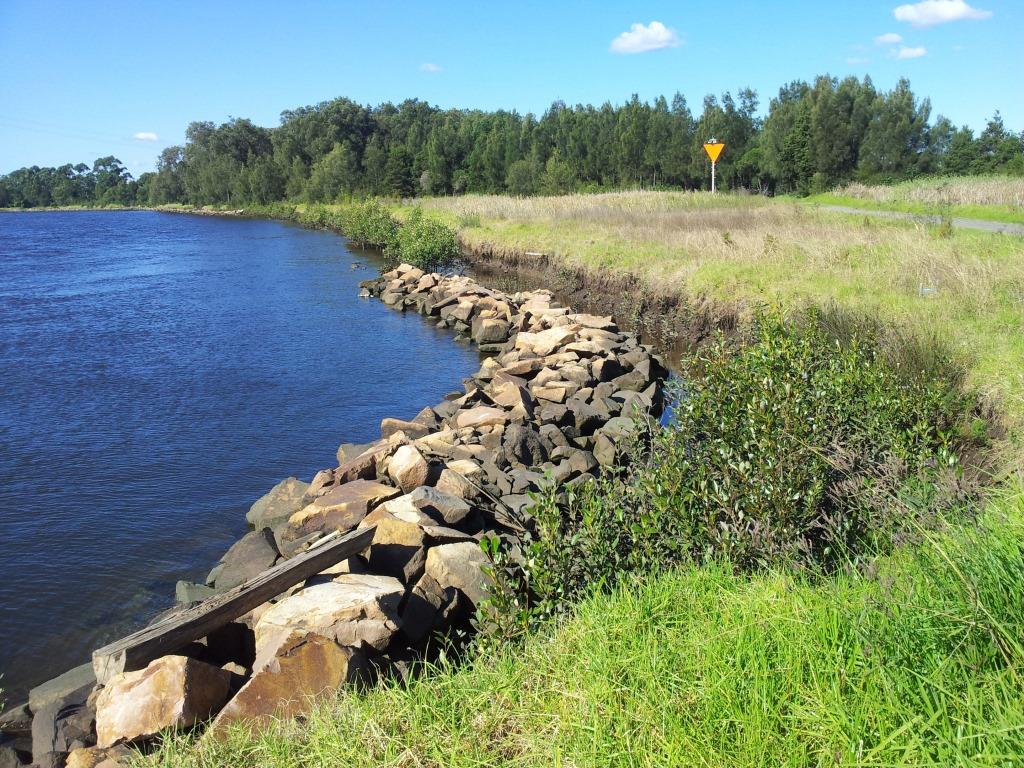 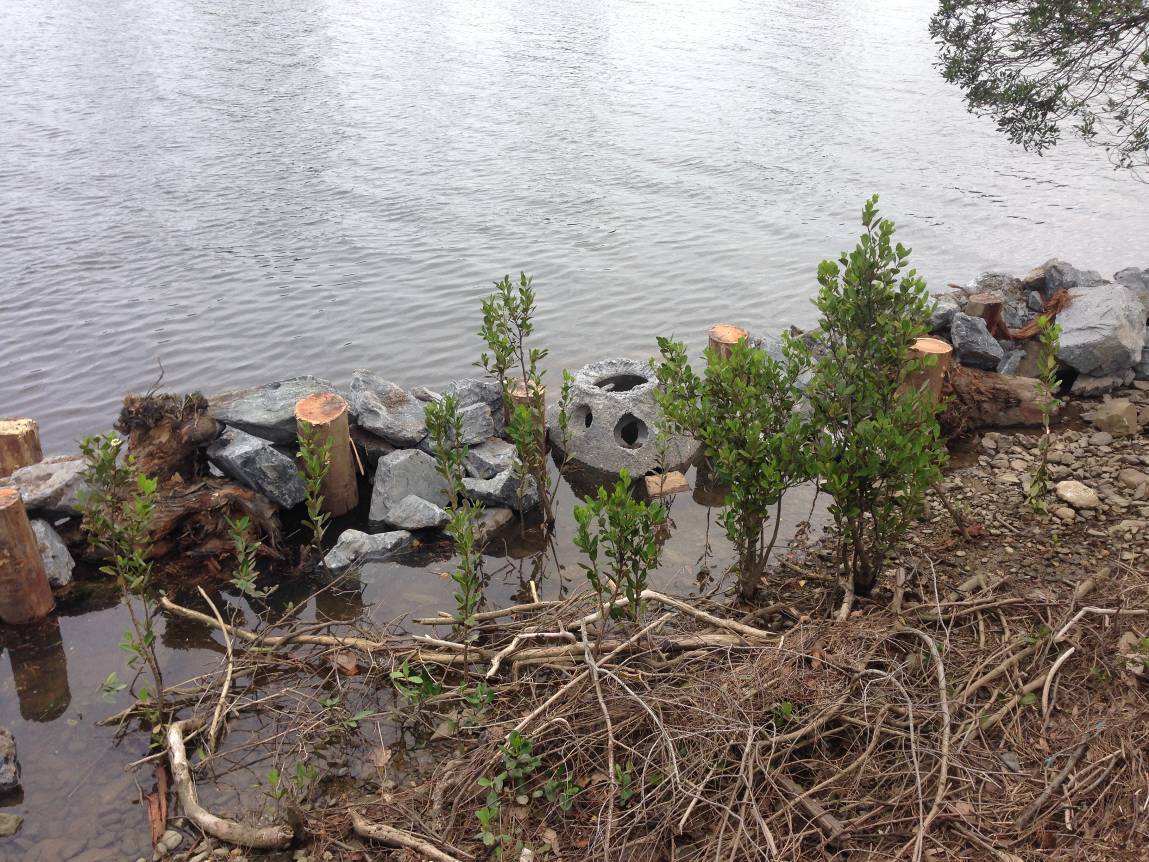 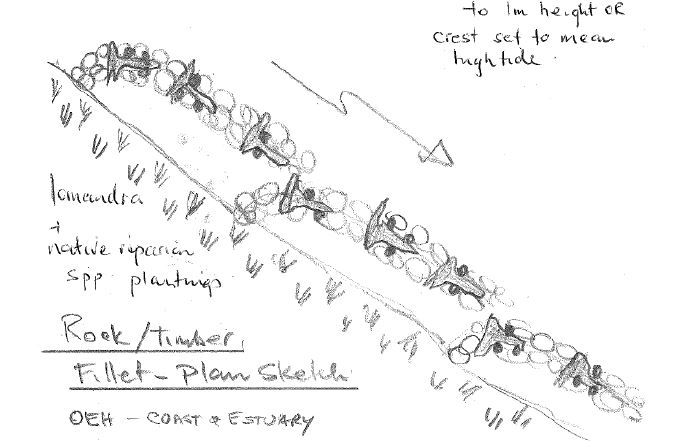 These techniques have been used with success along the Shoalhaven, Hunter, Manning and Hastings river estuaries. It has significant advantages over traditional bank protection methods such as seawalls, as the whole design is focused on establishing a wide band of mangroves in front of the eroding bank, as well as re-establishing upper bank revegetation (Skelton, 2003).

Learn more about the use of rock fillets to protect banks from erosion in the Hunter River estuary in the case study Scott’s Point rock fillets – fish friendly erosion mitigation here and in resources below. 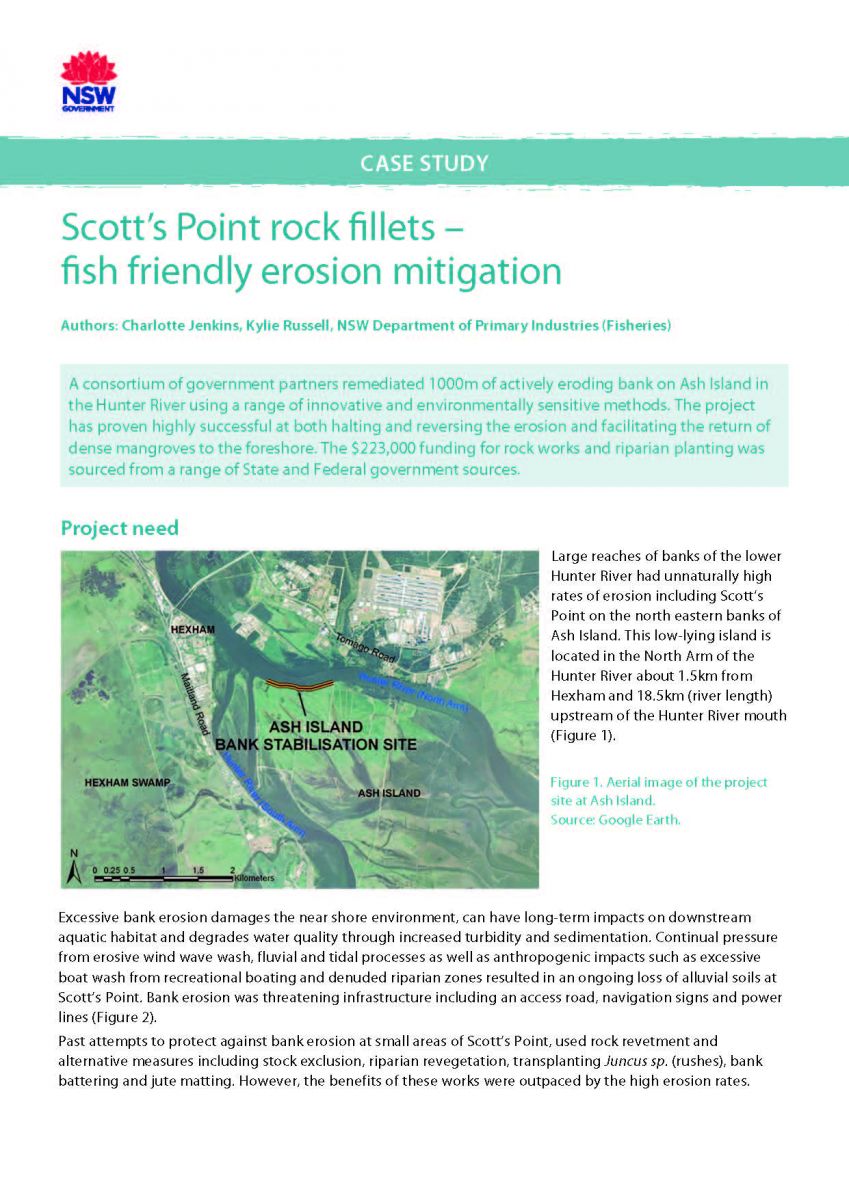